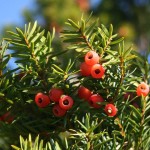 Dr. A just in from a call where the farmer found two dead heifers in the field side by side, thinking it bizarre he called us. Upon opening up the rumen of these girls it was immediately apparent what lead to their demise. The leaves and twigs below are from an ornamental shrub bush called Japanese yew, a commonly planted evergreen found around houses, cemeteries and used in Christmas/winter decor. This plant is lethal alive, cut, and even baled with a toxin that causes the heart to stop within minutes of ingestion. The most common scenario is neighbors thinking they’re being nice by giving the animals their nice green bush trimmings, but we’re still looking for the source in this case. This bush is a dark green with flat 1 inch leaves that have a prominent mid rib. Are there any around your livestock?? 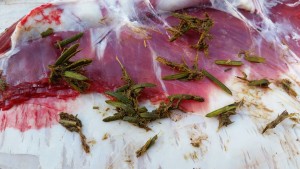 Yew leaves and twigs found in the rumen of a heifer on necropsy (animal autopsy).

This website uses cookies to improve your experience while you navigate through the website. Out of these, the cookies that are categorized as necessary are stored on your browser as they are essential for the working of basic functionalities of the website. We also use third-party cookies that help us analyze and understand how you use this website. These cookies will be stored in your browser only with your consent. You also have the option to opt-out of these cookies. But opting out of some of these cookies may affect your browsing experience.
Necessary Always Enabled
Necessary cookies are absolutely essential for the website to function properly. This category only includes cookies that ensures basic functionalities and security features of the website. These cookies do not store any personal information.
Non-necessary
Any cookies that may not be particularly necessary for the website to function and is used specifically to collect user personal data via analytics, ads, other embedded contents are termed as non-necessary cookies. It is mandatory to procure user consent prior to running these cookies on your website.
SAVE & ACCEPT